How Does An Oven Work? 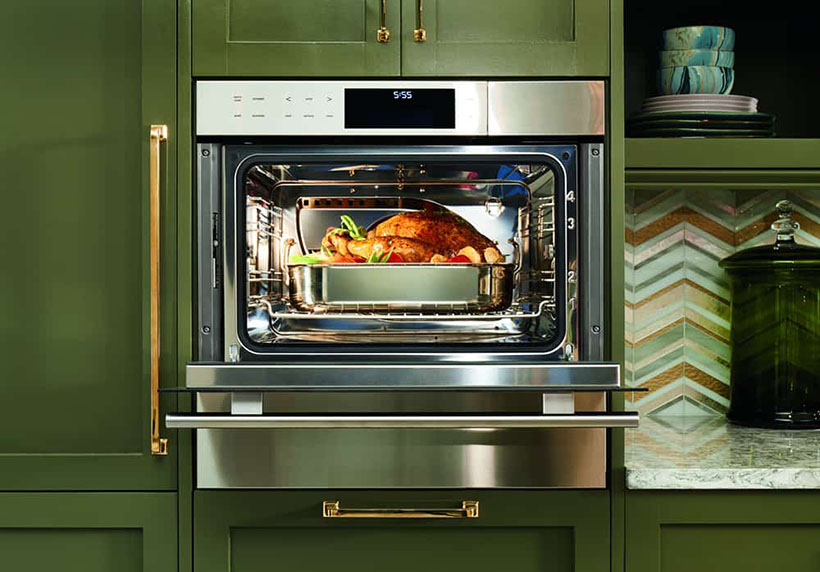 We see them every day, and most people use them for heating, roasting, and baking most days of the week. Few people, however, question the underlying electrical activities of an oven, which converts raw or partly cooked food into hot, ready-to-eat food for the table. Let’s look at two main kinds of ovens: electric and gas.

How Does An Electric Oven Work?

An electric oven is made up of two sets of big coil wires that heat up when power is applied to them. To use the oven, first connect it to an electrical outlet, then adjust the temperature and cooking time using the mechanical dial or electronic control. An internal thermostat is controlled by the oven’s dial. When you turn it to set the temperature, a copper wire that goes to the cooking area is notified of the temperature you have selected. This alerts the lower coil of wires, which also controls the oven’s interior temperature by sending signals to the thermostat to turn on and off dependent on the oven’s inside temperature. Because the bottom coil of wires acts differently from the upper coils of wires, it is often utilized for baking.

A broiler is the name given to the top heating coil. This is intended to cook food from the top down. It does not have a temperature control, unlike the bottom set of coils, and will heat up to the greatest degree unless manually turned off.

Other characteristics of an electric oven are self-explanatory. An electric oven’s timer allows you to bake or broil for a certain length of time. Most current electric ovens include a self-cleaning mechanism that warms the components to high temperatures, converting any residue in the inside to dust.

Gas ovens operate in a somewhat different manner than electric ovens. To begin, when the temperature dial is cranked, natural gas flows via a burner at the bottom of the oven. A cooker ignition must be squeezed in order to create a spark that will ignite the flame. When the flame is kindled, the ignition is sometimes positioned on the temperature knob, which is generally pushed inwards to release the gas and twisted to set the temperature.

A copper wire at the bottom of the oven serves as a temperature gauge. This manages the temperature of the oven by shutting off the burner when it becomes too hot, and turning it back on when the temperature drops. Most gas ovens, like electric ovens, include a flame at the top of the cooking surface that works as a broiler.

Although gas ovens are less expensive to operate (gas is less expensive than electricity), food sometimes takes longer to cook because the fans in electric ovens spread heat more evenly and guarantee a more even cook.

How Does My Electric Oven Work?

But, how exactly does an electric oven work? It may not be a question you have ever considered, but if you own or are considering purchasing an electric oven, you should understand how they function.

Electric ovens are very adaptable equipment that may be purchased as a single free-standing unit, a wall oven, or a combo unit. There is a lot more variety in electric ovens than you may realize, but the good news is that they all operate on fairly similar principles.

So now we know the fundamentals. How do the inner workings of the oven work? To begin with, when you adjust the temperature, whether with an older style dial or a more modern control panel, the heating components activate. A copper cable connects the elements to the temperature control box, which monitors the temperature and enables you to make changes.

When the heating components reach a high temperature (greater than what you really request on the dial), the power to them is interrupted and the heat level gradually decreases until it achieves the temperature you set.

Whatever kind of electric oven you have, one thing is certain: none of its heating components will move; they will stay stationary at all times. Heating elements are likewise not what you believe they are; they are made up of metal wires and sheaths.

The electrical wires that comprise the elements are how heat is delivered to them; once the wires heat up, the elements begin cooking the food. The heat goes to the metal, assisting in the uniform cooking of the components.

While most electrical ovens operate on the same principles, convection ovens have one additional feature in the form of a fan that circulates hot air within the oven. Some other kinds of electric ovens have embraced this function and will have their own in-built fan to blow air as well, but it is more often than not a feature that is peculiar to convection ovens.

Depending on the age, manufacture, and model of your electric oven, it will either feature a dial setting or an electronic control panel. Each control type has certain peculiarities, yet in many ways, they function similarly.

However, with electrical controllers and more modern electric ovens, you will have additional alternatives for broiling your meal.

How Does a Convection Oven Work?

A convection oven circulates hot air throughout the chamber of the oven, allowing food to cook quicker and more evenly. It does this by the use of a fan and exhaust system that circulates hot air around the meal. Not only does this assist food cook more uniformly, but it also produces a crispy outcome (similar to an air fryer) due to reduced moisture gathering.

To cook food, a standard oven contains two heating sources that heat the air within the oven. One is on the bottom and is used for the majority of cooking and baking. The other is located on top and is primarily used for broiling.

Because a traditional oven does not circulate the air like a convection oven, “hot spots” or pockets of air that are hotter than others may form. Because this might result in uneven cooking, recipes will often instruct you to rotate the baking pan to uniformly cook your meal.

An air fryer is nothing more than a tiny countertop convection oven. That’s true, air fryers don’t really cook food. They function similarly to convection ovens in that hot air is circulated around the food until it is cooked on the inside and crispy on the exterior.

But, before you toss away your air fryer, consider the following benefits of the internet’s favorite countertop device. Due to the tiny size of air fryers, the frying surface in which the food cooks is smaller and heats up quickly. This implies that cooking in an air fryer will take less time than cooking in a typical convection oven.

However, since it contains less food, you may have to prepare huge amounts in portions. We’ll let you determine if the trade-off is worthwhile. An air fryer is a terrific tool for cooking for just a few of people, but if you’re cooking for a big family, a convection oven is a superior option.

When to Use a Convection Oven?

So, if a convection oven warms food more quickly and evenly, why don’t we constantly use it instead of a normal oven? There are instances, believe it or not, when you don’t want hot air blowing around your meal.

What You Shouldn’t Cook in the Convection Oven?

Anything having a delicate batter that can be changed by squeezing it. This includes the following:

What You Should Cook in the Convection Oven?

Cooking with convection is more than just turning on the convection setting. Because most recipes are intended for conventional ovens, you’ll need to modify your temperature and cooking time accordingly.

It is suggested that you lower the cooking temperature by 25 degrees Fahrenheit. In terms of cooking time, Whirlpool recommends increasing the cooking time by 0.75. This means that a meal that typically takes 40 minutes to prepare should be cooked for 30 minutes on the convection setting.

You should also use bakeware with low sides to ensure optimum air circulation. To get the greatest results, don’t overcrowd your pan.

Previous PostHow Long To Cook A Turkey Convection Oven?
Next PostHow Does A Solar Oven Work?